The Workers’ Association of Hämeenlinna (HTY) is a local branch of The Social Democratic Party of Finland, operating in Hämeenlinna. Established in 1888, HTY is the oldest and the biggest local party branch in Hämeenlinna. 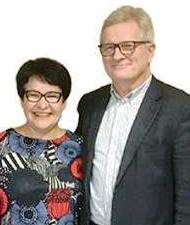 The core values of HTY are justice and fairness, tolerance, equality, and courage to revive and to reform. Our vision is to be a leading force in improving matters in the city and for the residents of Hämeenlinna. We are a political organisation that is unafraid, ready to reform and to tackle any issues.

HTY is an important political influencer locally. Hämeenlinna’s City Council features 15 social democrats from which eight are members of HTY. Two of our members, Tarja Filatov and Johannes Koskinen, are present Members of the Finnish Parliament.

In 2022, the President of The Workers’ Association of Hämeenlinna is Mrs Kirsti Suoranta. The association has approximately 300 members. HTY also has excellent street-level premises in the city centre at Raatihuoneenkatu 20. Our office is available for rent for outside parties and for our members at an affordable price.

HTY’s board holds a meeting approximately once a month. We organise events and monthly meetings for our members where we discuss current political issues.

We also organise public events such as meetings with local and national decision makers.

HTY has played a significant role in establishing many local institutions. For example, the City Theatre in Hämeenlinna first started as HTY’s drama society in 1903. The residential care home in Kauriala was also founded thanks to HTY’s initiative in the 1990’s.

We welcome you to join us in our events and to participate in our activity!